The Stick & The Stud

From Lake Tahoe to Auburn, California The Western States “100 Mile – One Day” Ride, the Ironman for horses, brings riders and their champions to battle for The Tevis Cup.  This is a different kind of endurance for both the horses and the rider – an ultra run – that requires teamwork, strategy and endurance. 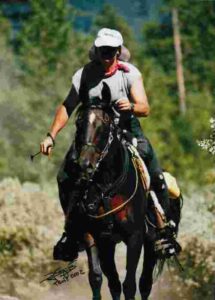 My husband Tom, and our 8-year-old horse Huckleberry, started the race with 216 of the toughest teams in the country on July 20, 2002.  Because the race is so treacherous there are several “Vet Checks” along the course where a Veterinarian examines the horses to ensure metabolic readiness to continue, as well as soundness of gaits.

Thirty-five miles into the race, and my boys had come to the first Vet Check along the 100-mile course.  It was here that we first heard of “The Stick.”  Shelley, a dear friend whose horse had been pulled for an injury early in the competition, recommended that we use it on Huckleberry and the results were unbelievable.

Shelley began rolling Huckleberry’s body, beginning at the top of his neck and eventually ending down in his rear hamstrings.  The results were apparent.  We could see him physically relax.  He began rocking into The Stick – with the pressure – as she rolled it down his muscles.

Eating at this part of the race would be rare for any horse, particularly unusual for Huckleberry, but crucial to a successful run.  Our astonishment grew when she rolled under his stomach and he began eating.  The next stopping point would be at mile 65.  That he was able to replenish his body became a huge advantage.

We were thrilled with the results and Shelley agreed to let us use her Stick for the rest of the day.  Mile 65 and the results were once more remarkable.  As we rolled the horse out he seemed to go hypnotic with the rhythm.  To say that Huckleberry was relaxed would be a grouse understatement.  His muscles were loose!

Of the 216 that started the race, only 93 finished.  Huckleberry – looking very strong and with plenty of animation in his trot – crossed the finish line in 4th place.   After untacking we again rolled Huckleberry out.

The next day in the Best Conditioned judging Tom trotted out on Huckleberry with fabulous vibrancy.  Astounded at how well Huckleberry moved out I was presented with the question, “What’s your secret?”  I shook my head, “This funny Stick thing. It’s amazing!”

We now treat our animals with what we call “Stick Therapy.”  We would recommend The Stick to anyone for use on their animals or themselves to prevent injury or for a quicker recovery.

Read more about the Pet Stick